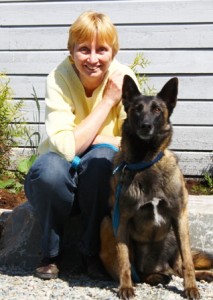 Dr. Adee Schoon is an international recognized scientist in the field of olfactory work with animals.

Netherlands Police, Norwegian People’s Aid, APOPO ed INTERPOL are only a few of the organizations that asked for her consultancy.

In 28-29th November 2015 she will be a guest of AlfaDog Training Academy for the seminar “The science behind detection dog training” (all the info about the seminar are here: http://adeeschoon.alfadog.it/) where she will show all the more recent researches about the use of the dog’s olfactory system in detection, forensic, SAR, ec…

Waiting for the seminar I had the opportunity to interview her with some questions about detection world myths and other.

Below you can read the interview. 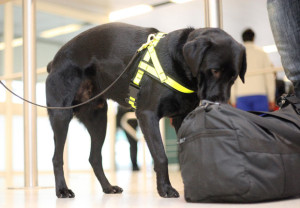 (Davide) In your experience as researcher in contact with dog trainers, did you see someone of them founding their training methods more on myths rather than following scientific principles?

(Adee) Yes. Dog training has traditionally been something you learned from a mentor, who knew all the secrets of the trade and would gradually introduce you to them. All kinds of beliefs and superstitions were passed on along with very useful tips, a lot of misconceptions about dogs and what they do was combined with sometimes a very good gut feeling on how to time reward and punishment. Dog handlers traditionally had no access to science so many new developments have been unknown. Happily this is changing: dog handlers want to know more and scientist are trying to communicate what they have discovered in more accessible ways. 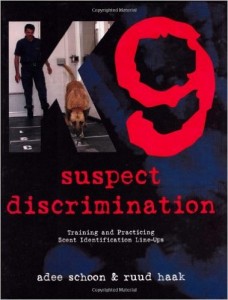 (D.) Which is the myth in training that you consider the more common?

(A.) I don’t know which is the most common. I do know which ones irritate me most since people should know better by now. Dogs do NOT smell better than people because they have a bigger nose or a more olfactory neurons than we do. And it does NOT mean your dog is good if it finds everything in training.

(D.) About the use of dog on forensic investigations there is a big gap between countries that use it and countries that don’t use it. In your experience why there is this difference?

(A.) For forensics to appreciate the use of dogs, the forensic people have to know what the dogs are capable of and trust that the handlers know what they are doing. They have to experience this themselves and open their minds. This can only be done if handlers are also open to what forensic people consider important: do not contaminate the evidence, understand the consequences of actions they take, a sound knowledge about what is possible and what isn’t. This common basis can only be built up gradually, and a dislike of dogs, or a (very understandable) distrust of a handler who claims his dog never makes a mistake, or a bias against (difficult) science, can easily prevent this from happening. 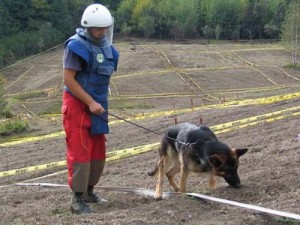 (D.) In your opinion how long will be the employ in the future of the dog’s olfactory versus the use of electronic noses?

(A.) Electronic noses are in their infancy. They require pretty large amounts of odorants, they are not good in discrimination yet, they do not analyse real time yet, they do not have the mobility to zoom in to the source of the odour plume. I think they have promise and potential in situations where relatively large odour sources can be brought to the sensors in the electronic nose in a controlled manner and that is happening now. But when the odorants are only present in small amounts, or not very volatile, if they are hidden amongst a lot of other odorants, or in a complex environment, I don’t think it will ever be possible. There will always be a role for the use of the dog’s nose. 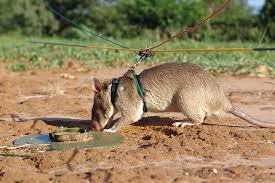 (D.) Which is for you the fundamental characteristic that should has a working dog to employ in operative olfactory duties?

(A.) I think there are two characteristics that are fundamental for detection work. One is a natural tendency of a dog to use its nose, as opposed to a dog that predominantly uses its eyes. This makes the process much easier. The second is that the dog should have a passion for something that can be built on during training. Food works up to a point, so-called “prey drive” is an extremely good passion to build on, but there are more subtle passions that can be used. And of course if the work of the dog is amongst people and animals, being well socialized is also fundamental.

(D.) Thank you very much Adee for your willingness, yours answers are increasing my curiosity about this topic!

(A.) It’s a pleasure, they were all interesting questions, see you in November in Italy!

You can fin her complete curriculum vitae and the list of the 29 pubblications following this link: http://adeeschoon.alfadog.it/adee/

PARTICIPANTS PLACES ARE LIMITED, BOOK NOW with a click on the immage: 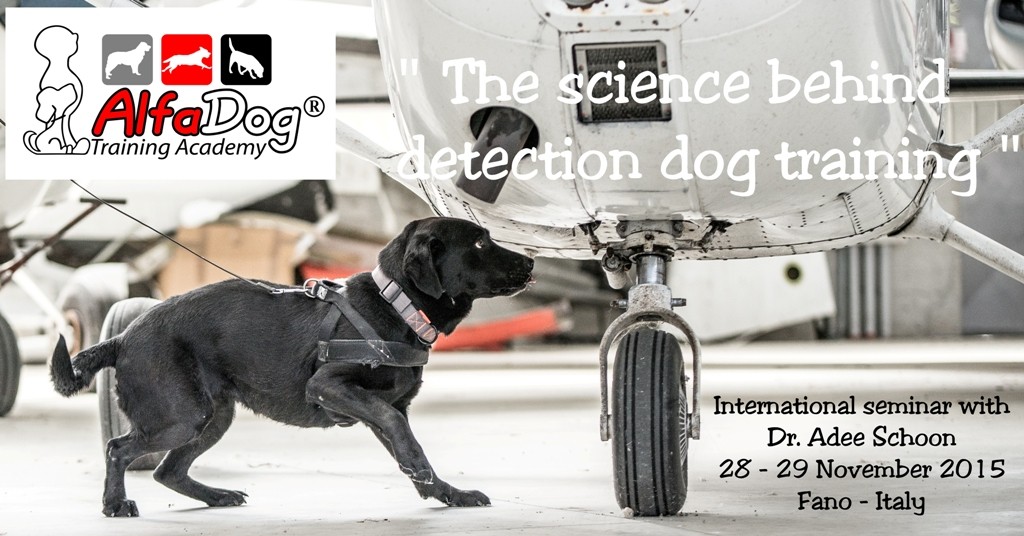